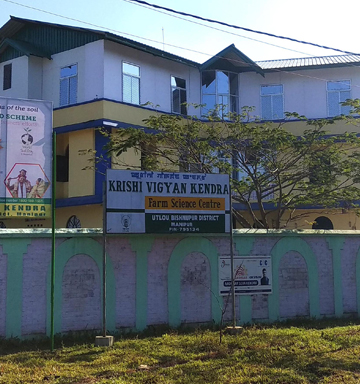 Krishi Vigyan Kendra, Bishnupur District, Utlou is located at a distance of 12 km. from Imphal, capital of Manipur and is 16 km. from the Bishnupur District Headquarters. It is 1km away from the National Highway-150 on the eastern side and is located at UtlouMayaiLeikai, side by side with SAG Complex. It has a demonstration farm of 0.75ha and a main farm of 25.0ha. A stream, Merakhong by name, runs adjacent to the main farm.

The district is in Subtropical agro-climatic zone. It has warm humid climate during summer, maximum temperature going upto 32 – 33 o C with 1200 - 1400mm rainfall. It has cold winter with night temperatures going down to 2 – 3 o C.

Bishnupur district is bestowed with many streams and rivulets following from the surrounding hills of Senapati and Churachandpur districts to Loktak lake and the Manipur river. Even in drought years, the district gets some respite from these streams. As will be seen from the following table, the average rice yield of the district is higher that of the state. During the year 2008-09 also the district was surplus in rice production (3.50 tonnes/ha against 2.46 tonnes/ha. of the state).

It has an area of 496 sq.km. with 42,366 ha. of cultivable land. An area of 9,129 ha. is under horticultural crops. Rainfall being high in the state as well as the district, the soil of the district is acidic, p H ranging from 4.5 to 5.5. The texture of the soil is mostly clay loam. The district has a great potential for production of horticultural crops. It occupies first position in terms of area and production of vegetables in Manipur. Vegetable growing yields a much higher income to the poor families. Some parts of the district are also cultivating fruits like pineapple, banana and orange etc. in commercial scale.

Ninety percent of the state’s geographical area of 22,327 sq. km is covered by hills and in a very small valley area of about 2232 sq. km lies the district of Bishnupur. Almost 99% of the population both in the hill and valley relish fish. Fish occupies an important place in the state, not only because of its food value, but also of its socio-cultural importance. The state is endowed with salubrious climate and rich water resources suitable for fishery.

Fishery is the major occupation and source of income for the people of this district living in and around the Loktak Lake (286sq.km), the biggest fresh water lake in NE India. The district is bestowed with a vast area under lakes, swamps and marshy areas (18,447ha). About 40,000 people are directly dependent on fishing for their livelihood and about 1 lac people are indirectly dependent on fishing for their sustenance. According to statistics maintained by the State Fisheries Deptt., Loktak Lake contributes about 60% of the total fish yield of the state before introduction of modern pisciculture. At present, the district has a combination of capture and culture fisheries. However, culpture fisheries is still prevalent than the captive one. Native fisher folk continue their traditional practices of fishing. Being a Ramsar site (1970) the lake has got the highest potential for both capture and culture fisheries. A large no. of agricultural lands along the periphery of the lake, having been submerged, has been converted into aquaculture farms. There are a number of fish farms varying from 0.5 to 10 ha. in size which are lying scattered along the lake periphery with a production range of 1 to 1.5 tonnes/ha./yr. Hence, the district has tremendous scope for enhancing fish production both for capture and culture fisheries. By virtue of geographical situation, the State is suitable for animal production through farming on poultry, piggery, dairy etc. Loktak lake which covers an area of 286 sq.km. lies in between Bishnupur district and Imphal West district and is the largest fresh water lake in north-eastern India. The district has ample scope of milk production because of its profuse natural fodders growing in low-lying areas and peripheries of the lake.